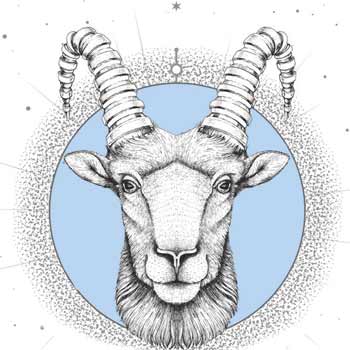 Mondey Capricorn might rediscover their prim-and-proper gene. Your horoscope heightens your ideas of decorum and propriety, so any rude hints or ambiguities, regardless of their target, might annoy you to the point of making a stand against the careless joker. Make sure you don't get dragged into a serious confrontation.

Tuesday, any attempts to burden Capricorn with whatsoever task outside of their direct duties will result in precisely nothing. And even those direct duties Capricorn might feel inclined to neglect. By the same token, their diplomatic skills will soar so they just might escape the situation unscathed. All in all, this promises to be a nice calm day, and as for any problem solving, listen to your horoscope and leave them till later.

Wednesday, Capricorn might get themselves involved in a conflict that could have a very negative effect on their social status. In the light of this, you'd be better off avoiding any arguments, especially direct conflicts. The catch is, wednesday everyone might seem to be bent on provoking you and testing the limits of your patience. Try not to take it too close to heart, otherwise you might end up picking up the pieces of your ruined reputation.

Thursday, Capricorn might feel overwhelmed by a plethora of emotions. Their horoscope endows them with the desire to be at the center of both events and attention. And drawing attention to themselves thursday might prove to be easy if you use money and success as topic starters. These two particular subjects are at the center of everyone's interest thursday, allowing you to find potential partners and meet some interesting people.

Friday's horoscope offers Capricorn every chance to climb another rung on the social ladder. There's no situation you couldn't put right - and gain something from it. The only advice the stars give you is to keep your emotions in check and don't succumb to an impulse.

Saturday, Capricorn might feel like socializing and becoming the center of attention, even if for a short while. And even if they don't, there's no harm in dreaming. Saturday's horoscope doesn't promise any disruptions but still try not to get too superior: you'll risk becoming the object of a few sarcasms. And saturday, any digs directed at you might hurt twice as much.

Sunday's horoscope might fool Capricorn into thinking that the pivotal point of the Universe is located right next to them. The fact that the Universe could have another opinion might surprise you no end. You may do your best to rectify this misunderstanding, doing everything to attract all sorts of attention and simply be in the thick of events. Just make sure you don't overdo it. Being the center of whatever is not necessarily a good thing.