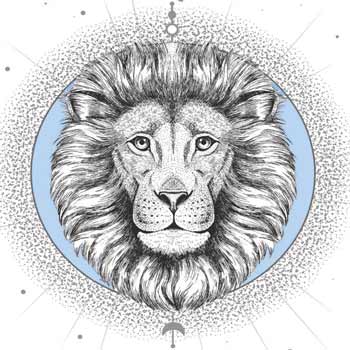 Mondey, Leo will know exactly what is to be done and how to do it. Those around you, however, will remain clueless giving you plenty of opportunity to prove, convince and coerce them into your point of view. Which might lead to one or two conflicts, according to your horoscope. So is all that proving and convincing really worth it? Without reverting to them, you might have a much more productive and positive day.

Tuesday's stars might encourage Leo to go mindlessly with the flow, paying little heed to any problems or misunderstandings. Even emergencies won't feel like anything worth applying yourself to. This peaceful state might last well into the evening when Leo may realize that the problems haven't gone anywhere! Your horoscope warns you that sooner or later you'll have to face them anyway.

Wednesday, Leo might feel a penchant for housework: not only in their home per se, but also in their personal matters. Wednesday's horoscope grants you an excellent opportunity to sort out any potential misunderstandings between you and your family members. That out of the way, you could proceed with all the brushing and mopping.

Thursday, circumstances will seem to conspire against Leo' plans, forcing them to go against the stream. You, however, might feel too uninclined to struggle. Your horoscope warns you against this attitude: it could get you into grief. Whether you like it or not, it's swim-against-the-stream day!

Friday someone might try to manipulate Leo - and very neatly, too. You might not even notice someone's pulling your strings. If you don't want to spend the entire day dancing to somebody else's tune, your horoscope advises you not to accept their words at face value and practice saying no to them.

Saturday as early as in the morning, Leo will find themselves prone to contemplation, choosing non-resistance to circumstances as their current behavior template. With that, Leo will show the ability to detect any potentially prospective tendencies and could, in theory, use this ability for their own fun and profit. Only they won't feel like doing so. In other words, saturday's horoscope will endow Leo with the knowledge of the road to success while denying them the will to do something about it.

Sunday's horoscope sets Leo against circumstances. Even though you might not feel like overexerting yourself, some eventuality or other will keep demanding your immediate response. Somebody you know might engage you in a long and pointless discussion or (which is arguably worse) get you involved in solving some absolutely irrelevant problem. It's only natural that you'll do your best to resist it as hard as you can - but sunday of all days such resistance might prove inadequate.