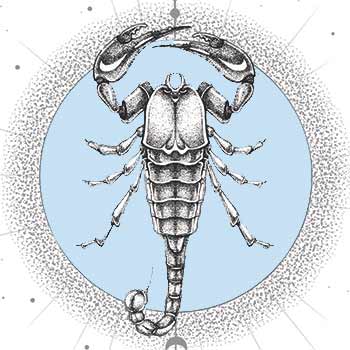 To spend the day on a positive note, Scorpio need to prepare in advance by giving the house a good clean the night before. According to your horoscope, nothing will annoy you more than a cluttered living space. Even something as mundane as a few errant breadcrumbs on the table might drive you up the wall, causing the rest of your daily routine to go south. A clean working space, however, will put you in a positive mood.

Tuesday, all of Scorpio' ideas will be marked by depth and clarity, despite the fact that they might never come to fruition. Dreaming is good for you. Tuesday's horoscope promises quite a few happy moments for the more creatively-minded Scorpio, but all others will end up having quite a good day, too.

Wednesday Scorpio might feel overwhelmed by all the brilliant ideas that occur to them, each of them clearer and brighter than the one before. Even though you don't need to act on them straight away, it's a good idea to make a mental note of them. Apart from that, wednesday's horoscope advises you to stay out of your boss's way and make sure you keep your nose clean.

Thursday, Scorpio risk spending the entire day in pointless conversation, mainly on the subject of money and success - including Scorpio' ruminations on how to lay their hands on some. The day's horoscope warns Scorpio against their innocent desire to exaggerate their strong points: it might earn them the reputation of a dreamer.

Friday Scorpio might feel the urge to be in control not only of their lives but also their thoughts and ideas. Pointless suggesting anything to them - Scorpio will generously mete out advice to others while keeping their own counsel. Well, some of their advice might prove useful and in any case, their horoscope doesn't show any signs of conflict making them exceptionally easy-going.

Saturday, Scorpio' horoscope is overflowing with misunderstandings, sometimes caused by your own inconsistency. It's not that Scorpio will consciously feel like breaking the rules but you'll be continuously distracted by various trivia. Something that an Scorpio wouldn't pay the slightest attention to on any other day might capture your fancy saturday, threatening to disrupt your entire schedule.

If sunday Scorpio stumble upon an idea, it might easily become their obsession. To add insult to injury, sunday Scorpio might stumble upon many more ideas than usual, resulting in quite a few bees in their bonnet. In this situation, sunday's stars advise you to keep your interactions with others to a minimum if you don't want to turn every conversation into a meaningless argument. Better go and do some creative project instead: no harm in venting your obsession that way.